We have now launched our Christmas Raffle offering three Cash Prizes worth a total €10,000. First Prize is €5000, Second Prize is €3000 and Third Prize is €2000.
Two raffle tickets can be purchased for €5. Or you can buy a full book of 30 tickets for €75. The raffle draw will take place on December 16th.
When you complete your purchase, we will fill out ticket stubs in your name and ensure that they are entered into our draw drum. All winners will be contacted after the draw and results will be published  on our website and the Evening Herald.
Beaumont Hospital is a wonderful Hospital that is striving to be even better, and your support can help us achieve this. Please be good enough to support us this year, by buying a full book of tickets or however many is within your means. Your kind support can help us to make a great difference to the quality of care and comfort that our medical professionals can provide to the patients of this great hospital.
Beaumont Hospital is widely recognised as being one of Ireland’s premier medical facilities serving patients the length and breadth of the country from Donegal to Cork.
Over the past two years, our donors including raffle supporters like you have helped us to support some of our most ambitious projects yet. During the two-year period of Covid-19, we have provided over €500,000 for new neurosurgical robotic and technical medical equipment. In excess of €2,000,000 has been raised for the build and fit out of our brand-new Breast Clinic. And our Beaumont Heroes Covid-19 Appeal generated €245,000 for a new Staff Garden and Wellbeing Walking Trail where hospital staff can get much needed exercise and relaxation.

Pictured on the raffle tickets is Brendan Lodola from Sutton in Dublin who, a few years ago went for a routine check-up with his GP. Initial test results revealed that Brendan’s Prostate-Specific Antigen (PSA) levels were slightly higher than normal, which was something his GP wanted to keep an eye on. Three months later, the PSA levels were elevated even further which can be an indicating factor of Prostate Cancer. After an examination was carried out by Brendan’s GP, it was discovered that he had an enlarged prostate and he was immediately referred to Beaumont Hospital Rapid Access Prostate Clinic. Brendan was seen at the clinic within two to three weeks of being referred. A biopsy was performed and, results confirmed that Brendan had Prostate Cancer. The staff were incredibly patient and took the time with Brendan to ensure that he understood the diagnosis and all of the options available to him.

With the incredible support of Brendan’s family and consultant, Mr. Richard Power, the decision was made that Brendan would have surgery to remove his prostate. The surgery was scheduled for three months later, allowing Brendan to enjoy a family holiday beforehand. Post-surgery, Brendan had a steady recovery taking each day at a time. Brendan’s busy job as a member of the Dublin Fire Brigade meant that he had to take some time away from work to recover. When Brendan returned to work three months later, he wanted to do something to recognise the support provided by Beaumont Hospital. With the help of his colleagues and friends, he organised an annual cycling challenge to raise awareness and funds for the hospital.

Five months post-surgery,Brendan was already back on his bike, taking a cycling trip that year to the Chianti Hills of Tuscany and living a normal life. Brendan kindly offers support to other members of the Dublin Fire Brigade who are going through the same thing.

He says “Get checked out no matter what age you are. I have young men at aged 40 coming to me for support. Catch it early and you can do something about it and lead a normal life. You’re never too young to get checked so talk to your GP if you have any concerns”.

About 3,890 men are diagnosed with prostate cancer each year in Ireland, meaning 1 in 7 will be diagnosed during their lifetime. As one of the country’s eight major cancer treatment centres, the staff of Beaumont Hospital are involved in saving the lives of many thousands of patients, for all forms of cancer, every year. Patients travel from all four corners of Ireland to access specialised cancer services and some, like Brendan, are fortunate to live in close proximity to the hospital. 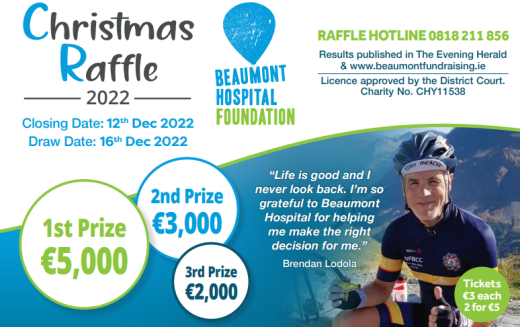